The two park sites will undergo "mandatory referral" review by the Planning Board, after which the Superintendent of Schools will recommend a site to the Board of Education, who would then request the County Council to fund construction.

Rock Creek Hills Park fails to meet the overwhelming majority of the official site evaluation criteria. The site does not appear to provide parity with other middle schools in the county.

A thank you to the Parks Department.


A thank you to the Parks Department, for recent landscape improvements to Rock Creek Hills Park, and the refreshed & repainted park sign.


"The role of parks in a community is really so important to people of all ages."

"I moved into my house ... because it's down the street from a park." [repost]

What does the 2011 "feasibility study" say about Rock Creek Hills Park? [repost]

The 2011 feasibility study shows that Rock Creek Hills Park is too small.
• In June, when the first design schematics were presented by Samaha Associates, the Virginia firm that was paid $67,500 to conduct the feasibility study, two of the three options presented routed school buses over basketball courts:

• In December, the Montgomery County Public Schools Director of Construction wrote that "none of the three [final feasibility study] options provide the 125 on-site parking [spaces] called for in the educational specifications".

"... you're doing grading and adjusting the levels everyplace,
so there's not going to be any trees left."

The 2011 feasibility study proposed a middle school that is too small to meet projected enrollment; to meet bus, faculty, parent and visitor parking; and to provide adequate playing fields. To accommodate 1200 students would require expansion, which will increase costs and limit sports programs even more. The site does not provide parity with other middle schools in the county.

But Can They Build It?


Rock Creek Hills Park is unique among listed candidate sites for B-CC middle school #2 in that a "feasibility study" regarding the proposal to replace the park with a 3–4 story middle school complex has been completed. At Wednesday's meeting of the site selection advisory committee, Montgomery County Public Schools staff briefed committee members on the results of that study, without mentioning that all final feasibility study options require extensive & expensive regrading (for example, the athletic field would be dropped four feet) and the destruction of stands of specimen and significant trees, which would require Planning Board approval.

MCPS has not submitted a Forest Conservation Plan to the Planning Board, whose review is required and binding. An appropriate Forest Conservation Plan that preserves identified priority-one forest would result in 8.17 acres of buildable land, smaller than the MCPS-specified 10.1 acre minimum for a middle school (at Wednesday's meeting, the site of the former Lynbrook Elementary School was eliminated from consideration after its buildable area was found to be 8.5 acres).

Also at Wednesday's meeting, Parks Department staff reiterated Planning Board Chair Carrier's stated position that "parks are not free," and that compensation would be required for the loss of this very valuable asset. 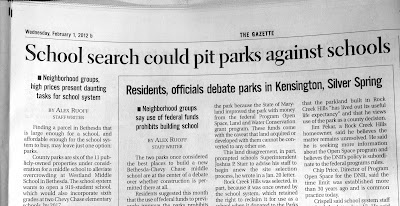