[an email response to a request for public comment]

In response to the recent request for public comment regarding a proposal to acquire Rock Creek Hills Park, here are THE TOP TEN REASONS TO PRESERVE ROCK CREEK HILLS PARK:

9. Our county's Housing Opportunities Commission used tax-exempt bonds to build the Kensington Park Retirement Community, which stands on much of the footprint of the former Kensington Junior High School. These senior citizens regularly use the park, especially its walking path, which would be off-limits to them.

8. The feasibility study proposes replacing the park's two full-size soccer fields, which saw 1200 hours of permitted use last year, with smaller "overlaid" fields that would limit athletics. The proposed school would be the middle school on the smallest site, in the entire county, without an adjoining (or “co-located”) park to provide space for student recreation and sports.

7. The park fails to meet most of the Board of Education's middle school site standards, including criteria for location, size, topography, and access. Indeed, the site fails to meet each element of the official "access" criterion: Frontage on a primary [70 foot right-of-way] road; three access points (for safety, to separate cars, buses, and trucks); community sidewalks. None of the final feasibility study options have three access points, or a separate service drive.

6. The feasibility study proposes construction on the steep slope of the small site, in contravention of concerns expressed by the Planning Board and County Council decades ago. This, and substantial regrading of the entire site, would raise costs; an Independent Construction Budget Estimate puts 2017 total costs at $64.5 million. Entrances for those arriving by car and and by bus would be located on different levels of the school, increasing staffing requirements and heightening security demands.

5. Ms. Laura Berthiaume, then a member of the Montgomery County Board of Education, stated that, because Rock Creek Hills Park is not of "adequate size," if the proposed B-CC middle school #2 were to be built there, then it would soon become necessary to build a third middle school, on the site of the former Montgomery Hills Junior High (currently the Yeshiva and Torah School of Greater Washington).

4. Given all the above, it is reasonable to ask, how was the site chosen? The park was not the first choice of the first site selection advisory committee, and the Gazette newspaper reported: " '... misinformation may have prejudiced the votes of committee members' [of the second site selection advisory committee], said Brooke Farquhar, a supervisor ... for the county parks department."

3. The Montgomery County Board of Education did no comparative analysis of alternative sites, including the alternate recommended by the second site selection advisory committee, which is more than twice the size of Rock Creek Hills Park. Montgomery County Planning Board Chair Françoise Carrier noted: "While two MCPS personnel attended our mandatory referral meeting and participated when asked, neither had any information about what the MCPS program would look like on that [alternate] site."

2. The B-CC High School NAACP Parents' Council wrote that they "cannot support the recommendation to build the new middle school in a potentially racially divisive and socially isolating location. ... We, therefore, ask the Superintendent and the Board of Education to decline to adopt Rock Creek Hills Local Park as the site for the new middle school."

AND THE NUMBER ONE REASON TO PRESERVE ROCK CREEK HILLS PARK IS:

1. Transfer of the land appears to violate state and federal law, and there is a judicial appeal request underway. If the appeal is granted, and is successful, then any changes to the park, including ownership and physical changes, will need to be reversed. 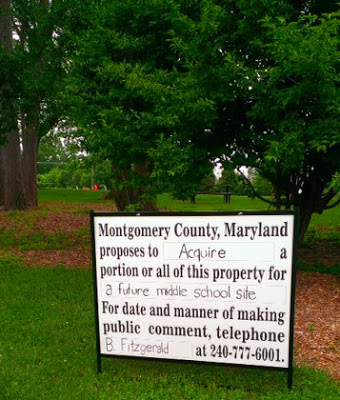 This sign requesting public comment was posted near the main park entrance. Although the sign doesn't say so, we were told today that the deadline for your comments is this Thursday, June 6th.

So, please provide your comments to: