"I am proud of our community’s sustained engagement..." [repost]

I am writing with an update on the proposed use of Rock Creek Hills Park for a new middle school.

In late September, the Court of Appeals of Maryland declined our petition for certiorari, thereby upholding the previous finding of the Court of Special Appeals that we lack standing to bring suit to enforce the law and preserve the park. Specifically, the Court of Special Appeals held that adjacent property owners lack adjacent property owner standing because the County’s option to reclaim the land for educational use was not a land-use related provision. We recently met with legal counsel to review this outcome, and concluded that no further legal action should be taken.

It does look like a new, second, middle school for the Bethesda – Chevy Chase cluster will be built on the site of Rock Creek Hills Park, with groundbreaking scheduled for July 2015, and opening in August 2017. The funds have been approved by the Council, and the construction program is in the Board of Education’s capital budget work plan.

Although our efforts – to direct the new school to a more suitable site; to enforce the law; to defend the park – did not succeed, they should be a source of pride. I am proud of our community’s sustained engagement on behalf of these goals. At this point, we need to focus on the many changes that the new school will bring, and on working together to seek best outcomes.

Thank you for your support and understanding. 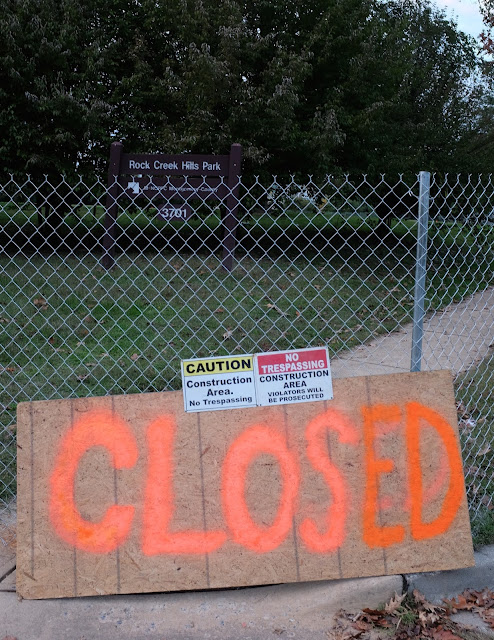 "Supersizing the school is unneeded, unwise, and unsafe."

[Testimony before the Montgomery County Council, 6 October 2015 (as prepared).]

My name is Dr. James Pekar. I am here as President of the Rock Creek Hills Citizens’ Association to ask you to vote against funding the addition - what MCPS calls a “cold dark shell” - because supersizing the new middle school to 1200 students is unneeded, unwise, and unsafe.

It is unneeded, according to MCPS’s 2015 forecasts, which state that the new school would hold no more than 803 students through 2024.

It is unwise, because the opening capacity of 949 students already exceeds recent guidance from the State of Maryland, calling for middle schools to be no larger than 900 students. The addition would push the total to 1200, far above the state recommendation.

It is unsafe, because hazards identified by our County’s Planning Board remain unaddressed, as was recently noted in the letter to Mrs. O’Neill from County Planning Board Chair Mr. Anderson and Councilmember Rice. Over a one-hour period every school morning, over 800 vehicle trips (on top of high levels of commuter traffic) will access this school via narrow, hilly, curving, neighborhood streets. Restricted visibility for pedestrians and cars will increase accident risk for children accessing the site. A single steep driveway, plagued with blind spots and low visibility, must be shared by all student drop-offs, crosswalks, deliveries, parking, and emergency vehicles. Interactions between walkers and vehicles would inevitably create hazards. While many MCPS schools are embedded in neighborhoods, few, if any, have such a combination of traffic and site challenges, which would be exacerbated by expansion to 1200.

For context, Rock Creek Hills Park is significantly reduced from the former site of Kensington Junior High School. After the old school was torn down, an elder-care facility was built on much of its footprint, taking a third of the land and a vehicle entrance. The remainder fails to meet almost all official County site standards, including size, topography, and access. Once built, this will be the only middle school with less than the new 15-acre requirement without an adjacent park to provide additional space. Due to this critical lack of space, this school will have no regulation soccer field, no large playing field, and just 2 of the 4 softball fields, 4 of the 6 tennis courts and 2 of the 3 basketball courts required by standards approved by the Board of Education. The soccer and softball fields are “overlaid” meaning just one athletic activity at a time. Classrooms are below standard size. If expanded to 1200 students, cafeteria and auditorium seating will be 25% undersized, necessitating “operational” solutions, such as staggering lunch throughout the day. Despite additional costs for retaining walls up to 22 feet high to maximize useable space, the site will not have a separated student drop off, and, if expanded to 1200 students, would be short almost 25% of car and bus parking required by MCPS.

So please, say no to this CIP amendment. Supersizing the school is unneeded, unwise, and unsafe. Instead, limit the size to 949 students, to improve outcomes, minimize harm, and, most importantly, protect children.