"Under a Montgomery County Public Schools plan, a new Kensington middle school would be squeezed on a site with inadequate space that will make the school inferior, some opponents of the plan say...

A group of residents said they are concerned that the site plan, as it stands, would limit athletic and academic spaces and pose safety hazards for drivers and pedestrians. The result, they said, is a school that would fall below the district’s project guidelines and would be unequal to other county schools, particularly Westland Middle School in the same cluster."

– From the article "Community members seek changes to Kensington school plan" by Lindsay A. Powers in this week's Gazette newspaper.

Email ThisBlogThis!Share to TwitterShare to FacebookShare to Pinterest
Labels: Press 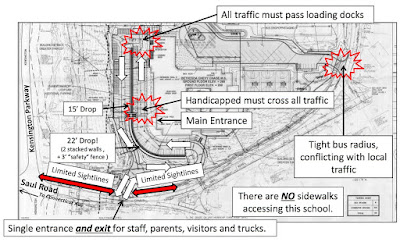 There's more, at "What Every Parent Needs to Know About the Proposed B-CC Middle School #2."